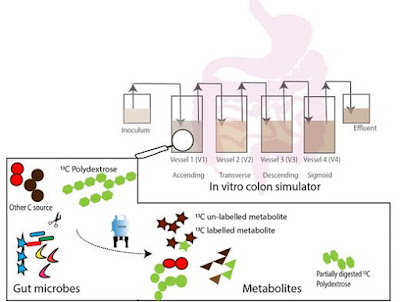 The importance of mammalian microbiomes is something that just can't be overstated. The genomics people haven't been making it up and we're seeing more and more metabolomics stuff to back it up. Unfortunately it can be a little hard to study what all those things are doing in the context of shifting conditions between the mammal's diet and a zillion other external conditions. Maybe variables need to be minimized.

You can't just put a mixture of the ten most common gut bacteria in a flask and rotate it at 37C and expect it to simulate physiological conditions. The colon simulator attempts to recreate something closer to what is actually going on. In this study they use it to track labeled polydextrose (that's the stuff in just about every boxed/canned product that is "low sugar". It doesn't take much time on Google to find that there are some well known side-effects of polydextrose -- rather than following some forum posts with some very immature statements in their titles down some sort of a rabbit hole, I decide to consult WikiPedia. Here I learn that these statements are backed by science because polydextrose can cause 10x more flatulence than naturally occurring fiber in some people).

If this isn't enough to ban this compound outright, we should definitely be studying it!

These authors put 13C polyglucose in their simulator and track the heavy breakdown products. They use 2 NMR systems as well as an LC-MicroTOF that they operate at 1Hz (presumably to obtain the highest resolution possible? or for massive scan averaging to simulate resolution?).

The output is really interesting and visually very nice to look at, but you'll have to check it out yourself. How I'm interpreting it is that the bacteria aren't doing anything at all uniform with this carbon source, they are utilizing it in different ways and then the new breakdown products in different ways based on their own metabolic processes and relative numbers (explaining the individual variation in processing polydextrose?) and the more we can learn about it, the better.

Have a great weekend!