(GIF borrowed from this site -- where I maybe learned what genetic algorithms are...?)

So....a good and interesting paper that introduces me to something totally new would be a welcome distraction!

Thanks guys, for this one! Cause..trying to figure out what the heck this is about required every whiskey lubricated neuron I could come up with...

Here is the concept:  You want to study some set of proteins in depth. If you're lucky enough to have an awesome Q Exactive, you've got a ton of options. You can T-SIM or PRM or normal DIA or msxDIA or pSMART and combinations of the two.

This paper focuses on PRM and DIA. Okay, another shoutout to these guys for describing PRM as the "gold standard" cause it totally is!

The weird flashy thing at the top of this post is an illustration I borrowed from a site that attempted to educate me on what a "genetic algorithm" is.

As far as I can understand, it is a technique for optimizing experiments and it is used in all sorts of fields, but MatLab explains it better:

Does that make sense? How bout after you read it and stare at the flashy thing? Alright!

What they want to do is study a set of around 100 phosphopeptides by both PRM and by DIA. The data processing on the two is going to need to be quite different. (BTW, their DIA is really sophisticated in how the windows were chosen -- 56 windows!?!? wow! QE HF speed, FTW!)

The genetic algorithm comes in because it can take the fragment ions from the PRM and help to determine what fragment ions should be used for the DIA. If you fragment a 2Da range there are going to be some fragment ions in there that you can trust -- that are no longer as useful when you are looking at a 22Da window, right? So...if I've got this right...this algorithm can help optimize which ones you'll need to be monitoring.

The important part here (I think) is that the authors don't stop at the MS/MS fragment ion spread. They go into the intensities of the fragment ions from the PRMs and the same sample ran by DIA as well -- then they can select the ions that not only are useful and unique, but are relevant quantitatively! In every dataset they look at, applying this smart algorithm improved the agreement between their results. And...I'm describing it in one direction...it appears that you could use this technique to fine tune what transitions you should be using for your PRM data processing as well!

Now...could I reproduce this? Not me personally, but I don't think that is the point. I think what we need is for this smart (and super smart sounding) methodology to be integrated into our favorite PRM/DIA data processing platforms for us. And it sure looks like it works!

Thanks to these authors for the timely and interesting study! 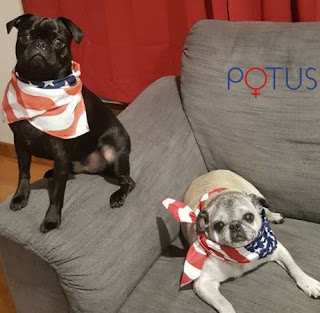 We'll get some sleep here and maybe it won't seem so..um...eek? tomorrow?
Posted by Ben