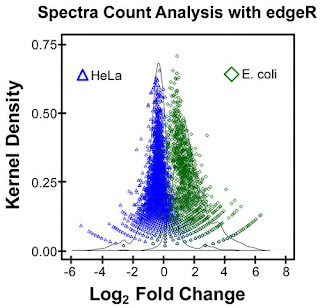 I have some mixed feelings about this paper, but I seriously think it is worth sharing. It is from Branson and Freitas and in this issue of JPR here.

In this study, they take a huge historic dataset from PRIDE and borrow an R package from BioConductor that was designed for RNA-Seq based quan and apply it to spectral counting. It turns out that it is stinking fast on a normal desktop PC and it appears to work very well on this dataset. All good news!

I guess my hesitation comes from my normal issues with spectral counting -- that it does work well on huge datasets with lots and lots of PSMs per protein. It would be nice to see this applied to another set that hasn't been fractionated and repeated so many times. It is a seriously interesting concept, though!

The authors take an interesting approach to the code as well. Unless I'm overlooking it, they didn't publish it anywhere. Instead, they produce a Supplemental text file with the example R Script.

Initially, this made me laugh. Partially cause I'm a little under half awake, then I realized how thorough the script was!

I'll be darned if it isn't complete enough CTRL+P in and just run because it does reference all the prerequisites. This probably sounds dumb, but...people aren't always this thorough with free resources that they put out there....and when they are, it is something that should be appreciated!