Is there any reason to skip low mass fragment ions? 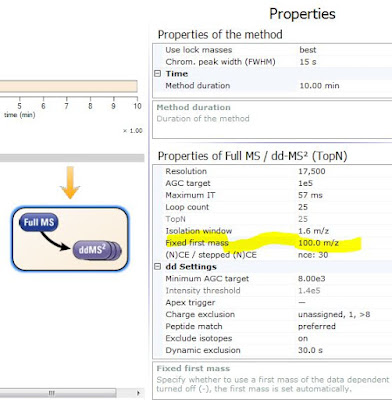 This is a great question I got from a really good lab recently (and is part of another cool method project we're working on for a later post). The question came about because of the fact that I keep leaving recommended QE methods with fixed first mass of 100 as above (please don't pay much attention to that screenshot, I just put that together so I could have a picture).

One day I was running some TMT samples late and went to bed forgetting to set the fixed first mass at 100. I know I'm not the only person who has done that (not calling anybody out...) but...wow... wanna get some crappy quan? That is exactly how you get some crappy quan. The QE cuts off at the 3/16ths rule or whatever and you get good quan for lower m/z ions. You get partial reporter ion quan for some in the middle and no quan for the ions with the higher m/z. To make sure that NEVER happened to me again I began always setting my Fixed First Mass at 100.0 (m/z).

Now, here is the question: Is this bad at all?

On the instrument side, I know that one. Nope!  The Q Exactive is the honeybadger of the mass spec world. You tell it to get (as above) 1e5 ions or spend 57ms trying to get those ions. That 1e5 packet of ions (or as much as it can get) goes into the HCD cell, fragments and those get read out. The Orbitrap doesn't take longer to read from 100-1500 than it does to read from 500-1000. That transient (amount of time for the Orbitrap to achieve its mass scan) doesn't change.  No problem there.

But this opened a question in my mind. What would it do to the search engines and/or FDR? Would those low mass fragment ions possibly cause us to find lower IDs or hurt us?

That I didn't know. Fortunately, some of the biggest names in this awesome field are super cool people. So I sent some emails!


"There's no direct penalty for acquiring signal in the lower mass range.  If there are real MS/MS fragment signals down there then that should only help.

However, if the search engine doesn't take into account peaks like immonium ion peaks then those do end up being just more noise peaks.  So that could be ever so slightly detrimental to a tool like SEQUEST where the cross correlation scores might be a bit lower because of the inclusion of noise peaks.

At the end of the day, I would suggest that your user go ahead and acquire signal down there (100 m/z or wherever) and not worry about search scores or FDR.  The impact, if there are any would be minimal and you would have some minimal benefit and some minimal detriment.  It shouldn't have any real impact on FDR analysis since every spectrum would be affected the same way (both the target IDs and the decoy IDs)."

TL/DR: Go ahead an acquire the low mass fragment ions!  And the people in this field are awesome.

Thanks to Dr. Bill Breuer for starting this conversation out of the other project we've been banging around.