Immunotherapies!  Man, that is about all anyone in the pharma world wants to talk about these days. And for good reason. Engineer an antibody that goes after tumors and just happens to have a killer chemotherapy "warhead" on it, and BOOM you kill the tumor without killing the patient. The successes so far have been amazing and people are going after it.

Problem is....building an antibody with a drug conjugated to it is tricky stuff. And you don't want to dose patients until you really understand what those weirdos back there in chemistry have done. And...even figuring out what they built can be hard.

Have you tried doing LC with intact antibodies before? Not the Waters antibody standard, but with a real honest-do-goodness-this-might-be-a-drug one day antibody?

Well, I have and they tend to look something like this C4 separation I did a while back.... 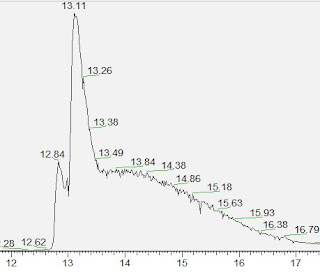 If you want to see pretty monoclonal antibody separations, I've got hundreds of those on this hard drive too, but they're Waters standard or one of the cool standards we can run in Europe but not in the U.S.  When you are looking at something that isn't just 4 glycoforms, but 3 drug conjugates and 4 glycoforms, getting good LC can be the hardest part.  Fortunately, for us, we can generally make sense of most of this with resolution. There are limits though, cause antibodies are so big that they often degrade too much to use resolutions above 15k or 30k (instrument depending).

What's that image at the tip top then?!?!?  Its this new paper from Erin Redman et al., In the study they describe the use of capillary electrophoresis coupled mass spec to separate out ADCs with very small modifications into nice, rapid, distinct peaks!

How good is their separation? Its good enough that a TOF can get the individual components out of the mixture. Can you imagine what you could do by coupling CE up to a Q Exactive?  You'd end up making the job of ADC analysis a whole lot easier. Hell, you might open up the possibilities of really looking at polyclonal antibodies, which is honestly kind of the holy grail for a lot of my friends out there.

They reference a study they did last year with this same setup. I don't have time to read it this morning, but this is the front page image from JPR... 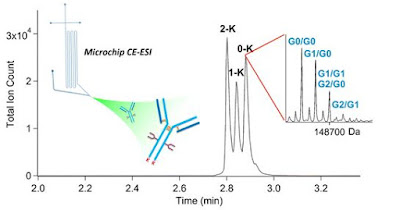