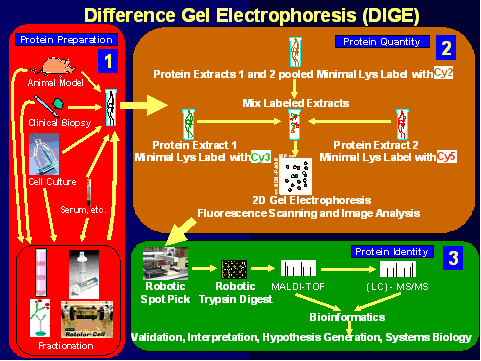 Around the time I started my second postdoc, my lab was in the transition away from 2D-DIGE.  I started a SILAC project, did some TMT and the lab never went back.  My predecessor did some great stuff with 2D-DIGE, though, but I only worked with one study as we overlapped and control of the LTQ was handed over to me.  Considering that it was a technology we used, but then didn't use again, I guess I considered it out-dated.  There are obviously some drawbacks, such as limits of detection and proteins of extreme hydrophobicity/size/PI, but there is tons of good data that came from this.

G Arentz et al., would like us all to know that DIGE isn't dead.  And there have been developments that have improved this technique that we may not have noticed.  Especially if you have all the stuff sitting around to perform DIGE, you might want to take a look a this paper.