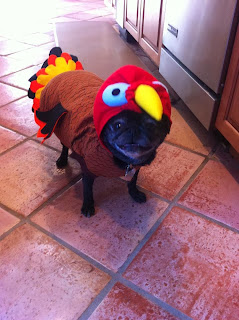 Happy Turkey day!  This time, that isn't my pug, he just looks just like him!  That costume is ridiculously expensive.  I'll get it after the holiday when it goes on sale for next year!

Now, I often wonder strange things like:  A whole lot of researchers sure do work with green monkeys as disease models, but the genome has never been finished?  But the turkey genome was finished way back in 2010 (partially, I believe due to my alma mater and the fact that a neutered turkey is our mascot...).  Wow.  This isn't even close to a coherent thought at all!  If you're used to my disjointed rambling, you're probably okay with it, or you've already skipped ahead to the science.

So...what do we do with a turkey genome?  Turkey proteomics, of course!  In this study, Karlheinz and Matthias Mann take a look at the turkey egg shell in comparison to that of the chicken egg shell. Seriously!  And yes, it is a pretty interesting paper!  Ever wondered how to extract protein out of an egg shell?  Not any more!  This (open access) paper has a clear method.

The extracted proteins were ran on an Orbitrap Elite in high:high mode and comparisons were done with the fancy statistics in MaxQuant/Andromeda.  It is pretty neat because the extraction required the subfractionation of the proteins present by what they were dissolved in.  Now, I'm a little bit confused about the analysis.  It appears that they used MaxQuant to do a meta-analysis (in short, old data from a database compared to newly acquired data) of the new dataset (turkey) vs an old dataset (chicken).  I do a lot of meta-analysis of genomics data.  But we have all the nice statistical tools we need, as well as enough replicates of the data to verify statistical robustness (a single microarray may have as many as 20-100 signals per protein depending on the array type).   I am unclear as to how this can be done in MaxQuant.  It is likely that the newer/est versions of MaxQuant have some new statistics tools and I just haven't upgraded recently enough.  That probably means it's time for some MaxQuant reviews!

Now we just need to get working on that green monkey genome.