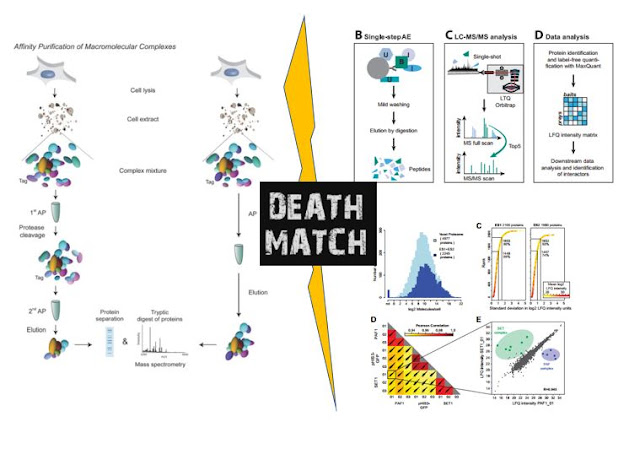 The figure on the left is from this great review. The one on the right is the one I'm going to ramble on about for far too long. The link and title are further down the post.

Okay -- so I'm spending lots of time thinking about immunoprecipitations. I'm also spending a lot of time repairing nanoLCs. That's the name of the game. You have 5 nanoLCs in one room, chances are 1 of them is not working at all and 1 has some vague symptoms that are going to take 3 days to diagnose. There is a major problem if you are thinking about these two things -- besides blood pressure -- okay...there are lots of problems....but one I'm thinking about a lot is carryover.

On that note, check out this study from a while back -- trifluoroethanol injections to clean up your whole system? Might need to investigate this one....

I don't want to scare you with my recent carryover analysis -- suffice to say -- I'm starting to think that nanoLC columns NEVER let go of 100.000% of the peptides that they once saw. I'll go one step further with absolutely no empirical evidence whatsoever --  I think if you had infinite sensitivity that you may always detect every molecule that the C-18 had ever seen in high abundance. Maybe that's an exaggeration -- but...wow...take a good hard look in the noise of your XICs and you might not be too excited to see what is down there....

I tell you what -- that fancy nanoLC that uses cheap disposable columns for every sample is starting to seem like a better idea all the time. But I don't have one, but the idea sounds smart. Maybe essential is a better word, particularly if MS sensitivity continues to increase?

I'm gonna roll back on the doom and gloom -- does it really matter? If I'm picking up a peptide on my 9am run and it has a signal of 1e7 and enough to have a gorgeous fragmentation pattern -- but if I look in my XIC at 3pm and see that I've got a peak with that same mass and retention time at 1e3, it never triggers fragmentation, and I can't find an isotope for it -- does it matter at all? Is that even enough evidence to call it real? What if it is 1e4 and you get 2 fragment ions that look okay? That line is a little harder to draw...

You know what IP method has been out there for a few years that is extremely resistant to carryover issues? Affinity enrichment!

AE was described in this Max Planck study.

There isn't a huge difference between Affinity Purification (AP) and Affinity Enrichment (AE), when you get to the bottom of it. The "P" in AP writes a check that is a little hard for us to cash. Purification assumes that sample A will have peptides that sample B will not, or vice versa. Presence/absence is really hard to determine in a nano-proteomics experiment. Take that sample over to a more sensitive instrument and maybe all the sudden the LOD (limit of detection) drops and maybe your answer isn't the same on the second run.

Affinity Enrichment -- that is a much better term! I can enrich for your protein and it's cellular partners. That's much more realistic than purifying it. What makes this study really interesting is that they use a statistical determination on the binding partners that matter based on XIC quan! (Sure! You can do this with spectral counts, but at low abundance XIC is going to be more accurate). Look a little closer? Yeah -- maybe that PSM can be detected, maybe not? But if you have relative quan and a cutoff for what really matters -- I'd argue this is a better way forward. The model that is used to test this in the study is also pretty convincing.

Wow -- too many words. I just revisited this paper, was excited about it and then went on my rambly way.

I should go get some chicken wings or something before the big american football match starts.... 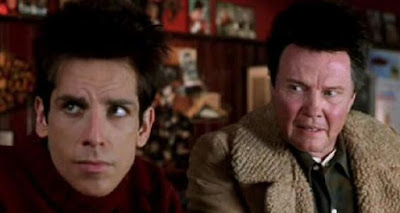