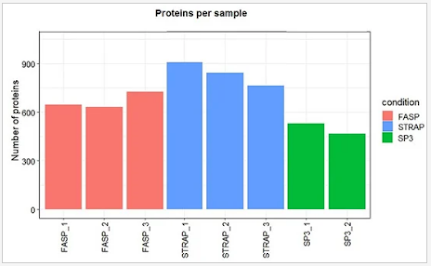 Aquaculture is one of the fastest growing industries in the world and we'll soon hit the point where the majority of aquatic products consumed will be from these farms. There is an interesting 20 year summary here.

With any move of new species to mass production, new and smarter ways to monitor what is going on is going to be absolutely critical. What a great place for streamlined high-throughput proteomics! Sequence that mussel or oyster's DNA with 4,000x coverage if you want (I'm sure someone will) it's not going to give you insight into how that organism is responding to stresses.

This group took a look at some aquaculture species when proteomic samples were created with FASP, S-Trap and SP3.

The samples were analyzed with a Q Exactive HF to see which method they'd use for monitoring aquaculture stresses. I should note that this appears to be more exploratory than what would make a good "is that oyster farm stressed out" due to the use of 80 minute gradients and 120k/30k resolution scans. It should also be pointed out, as the authors themselves highlight, that these results might be affected by the not-entirely-100% comprehensive protein FASTAs for the organisms they studied.

In general, though, all 3 methods perform well and they all have peptides that are not caught by the others. For characterizing what the authors wanted to, FASP seemed to have a narrow lead over SP3, with S-Trap just behind, but S-Trap resulted in the highest number of unique proteins identified.

A good summary is probably that people use all 3 methods for good reason and what really matters is consistency. A big part of my first year back in academia has been collecting as many digestion protocols that people have inherited from grad students long gone and

(not that, but I've definitely thought about it when I've seen some that were clearly written before my time.... )

traded them for the S-Trap quick card protocol. Maybe there are peptides that we're missing that SP3 could catch, but I absolutely prefer the thought that the 2 S-Trap 96-well plates I'm doing digestions with today will look just like the digestions from the S-Trap spin columns that a collaborator used 6 months ago.