Deep coverage of the beer proteome! 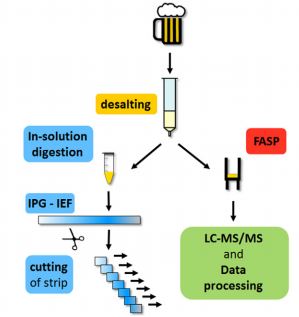 On the new list of surprisingly complicated matrices that also make me feel strangely thirsty on Saturday afternoons...

...the BEER PROTEOME sequenced to a depth of 1,900 proteins!

Why are there 1,900 proteins in my beer? I'm going to guess there isn't in mine, because I'm trying to get in shape for my local "basketball league for people way too old to be playing it" and I'm sticking to an American atrocity called an "ultra light" (don't try it!!).

This group pulled a real beer -- a traditional Czech one -- and did some interesting isoelectric focusing based fractionation (the opposite of the 1D-gel that I do) and used an LTQ Orbitrap Elite on the fractions (they employed "high/low"). (FASP was also utilized for digestion as shown in the image above).

I know what your first question is -- where did they get the beer from? From a grocery store! Apparently they live somewhere civilized where you aren't limited to one specialized government-operated location per township that is authorized to distribute these sinful liquids. These intrepid researchers can buy beer for some topnotch science experiments and also pick up some crisps to eat without wasting gas driving somewhere totally different!  I'll trade that for my local grocery store -- that also carries firearms (an increasingly common thing in the U.S..) in an instant!

If your second question is also -- how much was necessary for this proteome depth(?) I can't quite tell. They concentrated it to 3mg/mL prior to the desalting step mentioned above.

Ben's rambling aside -- This is a solid bit of science on a really interesting topic.
Posted by Ben