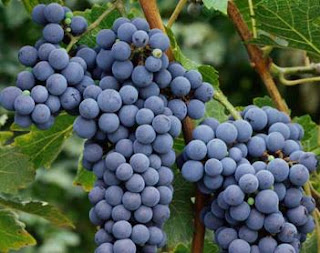 This new paper from Alvaro Cuadros-Inostroza et al., appears to be an effort to combine two of my favorite things. In the study they look at the metabolomes of growing merlot and cabernet sauvignon in Chile during over two seasons. Grapes are harvested from multiple time points and from multiple vineyards so that they have enough values to do tons of statistics.

In the study they focus on 115 metabolites that are detectable in all of the samples. I'm only just starting to get a feel for modern metabolomics, but I am impressed with the downstream stats and analyses. They mostly do their processing in R after extracting the data from the vendor software, but they work up nice graphical outputs like this one (click on it and it should expand): 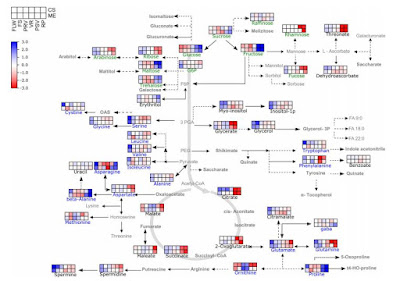 I think this is a remarkably clear chart. Curious about how glutamate production differs between cab sauv and merlot? Find its branch off the TCA cycle and read the heat map across and you'll see that glutamate levels begin much higher in cab sauv but that the levels drop rapidly at the end of the season. A rapid Google search on glutamate production in wine grapes will lead you to this cool book you can read free online (how did we research anything before Google...?) that references a study describing this characteristic of ripening in cab sauv. Why does merlot taste different? Maybe it has to do with glutamate-asparagine ratios?!?  The book doesn't appear to reference a study looking at merlot, so maybe this is a completely new data point!

In sum, this is a nicely presented paper on a cool topic that makes metabolomics seem really useful and not all that scary.