Use protein solubility to get around protein abundance issues in biofluids? 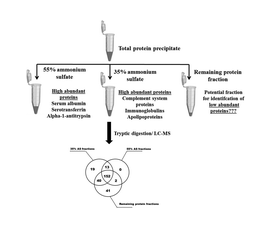 For biofluids, one of the biggest problems is the high abundance junk. "Junk" probably isn't the right word since evolution probably wouldn't have erred toward filling our fluids with albumin if it wasn't important, but...you know what I mean....

In an interesting take to this problem, Bollineni et al., tried a protein solubility approach. Rather than specifically depleting the most abundant proteins using an immuno-affinity approach, they used different concentrations of ammonium sulfate to precipitate or solubilize different populations of plasma proteins. This gave them a less directly biased way of fractionating out the high abundance things.

To my friends out there who are in the "do not deplete!" camp, sure, you're probably going to run into the same problems, like the fraction that has albumin will pull down tons of interesting things with it. But for people who will accept this loss in order to see the stuff that isn't at 1e9 copies per uL this might be an simple approach to see something different than what your Top4,10, or 14 depletion column is giving you.