Stop guessing whether it is Leucine, Isoleucine or Hydroxyproline

Something I say a lot is along the lines of:  "One day I'm not going to learn something about mass spectrometry..."  I neither hope for nor expect that day to come.  I particularly like when old paradigms get knocked down.  Holy cow.  And this is one.  And it's not new, it's just impossible to keep up (for me, anyway).

Anyway, every search engine forever has required that we set leucine and isoleucine as equal, right?  And we always have this uncertainty in the backs of our minds that this could also be an artifact of a hydroxyproline conversion.  And here comes this paper (and a couple others as well, but this is the one that I was given) that says "Hey!  We don't have to guess. ETD can tell the difference."

The paper in question is from Kallol Gupta et. al., and was a study with contributions from researchers in 3 facilities in Bangalore, India.  In it, they show how ETD fragmentation demonstrates differences between these three isomeric amino acids.  I love this paper.  I especially love that it is yet another example of the meme that I've been trying to popularize, one talk at a time. 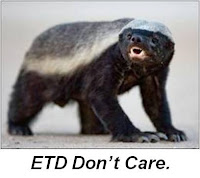 In comparing the ETD to the great honeybadger, it's great because the ETD don't care about:  high energy bonds, low energy, weird PTMs, the 5/18 cutoff rule or even about isomeric peptides.  The ETD just does what it wants, busting peptide bonds and elucidating sequences.

Anyway, everyone should check out this paper.  Whether you are using ETD or not, it is great to be reminded that this is a young field and that these rules that we're so used to may just be the next set to be broken by the next advance.
Posted by Ben