Proteomics of CSF of children with meningitis 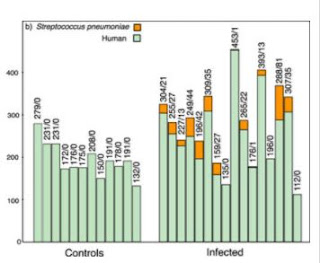 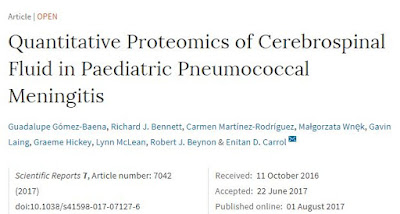 this team successfully detects and quantifies pneuomococcal proteins in children with bacterial meningitis.

A good bit of this study is optimizing a method for collection, digestion and prep for mass spec. They use in-solution digestion with a commercial MS-compatible detergent prep, and they use 2 hour gradients on 15cm nanoLC columns with an LTQ Orbitrap Velos system.

And...loads of bacterial proteins even in the complexity of the CSF proteome! I'm no medical expert, but those sound like some seriously sick kids.

Progenesis appears to be used for the quantification and all IDs were obtained with Mascot after using the Proteome Discoverer Viewer to create the MGFs. The paper is straight-forward, but the downstream plots for analysis are really clear and eye-catching. They were generated using R and a stand-alone software package called Gigawiz, that I hadn't heard of before this.

All the data was uploaded to ProteomeXchange via PRIDE and is available here (PXD004219).
Posted by Ben