Cranking up Thermal Proteome Profiling for Drug Mechanisms with TMTPro! 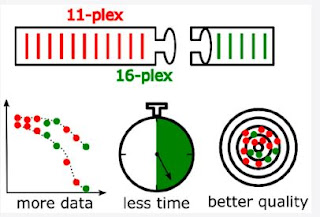 Thermal Proteome Profiling is one of the awesomely powerful new(-ish) methods for rapidly working out how a drug works in a cell.

I've rambled about it here and there, but it was way too slow for me to suggest it to anyone around me until people started multiplexing it. (PISA blog post here that will link you to older posts/papers).

Why not get the whole experiment over with fast by using TMTPro?

Interesting from a very boring level, the authors are using a Tribrid system and they don't change their fragmentation parameters for the TMT11-plex to the TMTPro. In every paper I've seen so far, people are using a little less energy, particularly for the Q Exactive family of instruments. There is some wiggle room in HCD for fragmentation on everything. At a purely anecdotal level, it has seemed to me that the HCD/IRM assembly on the Fusion isn't as particular about HCD energy as the terminal HCD on the Q Exactives. I can't back that up with any data, but at a big core where multiple users accessed each instrument, the Fusion HCD seemed less annoyed by users who used slightly different fragmentation settings. Maybe that plays in here?