Another cool PTM to think about: detyrosination 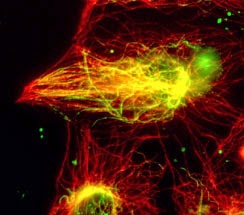 I <3 cytoskeletal proteins. They are super important and they are very conducive to shotgun proteomics (mostly because they are large soluble proteins and there are tons of them per cell.)

Something entirely new to me is a post translational modification (PTM) that occurs in tubulin during rearrangement events like cell division.  This PTM is detyrosination.  Apparently it is critical and I bet its something a lot of us haven't looked at or for.

According to this paper in the April 23 issue of Science, detyrosination is responsible for this process. 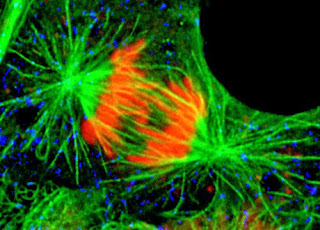 Thats mitosis and the green are stained microtubules.  During cell division the chromosomes are replicated and then pulled by cytoskeletal proteins into the two daughter cells.  Despite thousands of years of research or whatever we haven't really ever understood this process.  Turns out its the detyrosination up the microtubules that makes this go.  Man, wouldn't it be wacky if this PTM didn't occur at the correct time?!?!  Could this be linked to some of the insane cytoskeletal changes in cancer cells?!?  The image at the very top I just randomly grabbed from Google images. It appears this PTM happens and the antibodies aren't cross reactive.  You can have one antibody that only reacts to detyrosinated proteins and it looks like this is something that happens a lot!

Searching for this PTM is a little tricky because it requires the removal of an entire amino acid (or acids).  For a full breakdown of how to set up this search with Mascot you can check this sweet paper from Ziad Sahab et al., in JPR from a couple of years ago (open access!)  Turns out that this process is totally disregulated in cancer and this is just one of the many many many things in this world that there has been tons of work done on that I've never known anything about.

Shoutout to Dr. Norris for the great morning coffee read!
Posted by Ben