What mass range contains the most (and best) fragment ions? Part 2

This is a continuation of an entry from a couple of weeks ago.  The question is this:  If I'm using an LTQ Orbitrap system, should I always be scanning in MS1 (and selecting fragment ions) with an m/z from 300 to 2000, or am I wasting valuable scan time?  Should I really be scanning from 500-1,000 because there is no useful information in the low or high mass ranges?  In the first analysis we looked at a file that was generated from an LTQ Orbitrap Velos using a standard Top10 CID method.  What we observed in that experiment was that although some fragment ions were generated in the m/z range >1600, no peptide sequences were actually obtained from these ions.

The follow up question:  Is this some artifact of the LTQ?  Does the ion trap simply do a better job of fragmenting ions in the mass range I observed?

In answer to this, I obtained two files from an old colleague.  In this experiment, their lab was comparing the Top 10 CID method on an Orbitrap Velos (the high/low method) to the HCD based Top 10 method (high/high).  The same sample (a fraction of human serum) was ran in both methods.  The same amount of sample was injected, the MS1 was set at 60,000 resolution.  The HCD Top 10 ions were read in the FT at a resolution of 7,500.

The average m/z of the identified peptides from the CID method was ~821
The average m/z of the peptides from the HCD was 769, which seems interesting until you note that the standard deviation of these two averages are ~150 amu.   I was about to consider them the same, but decided to do a student's unpaired t test.  The p value is 0.0162, which is technically a significant value.  With error bars overlapping this much, I am willing to say that the HCD may allow the identification of peptides of lower m/z.

Here are the ID'ed peptide distributions by m/z 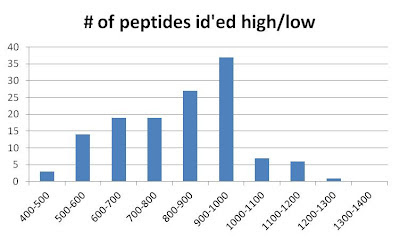 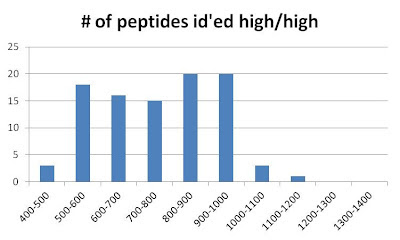 First of all, I want to caution that this is again, one experiment, from one run of one particular sample ran in one software (PD 1.3) versus one search engine (Sequest).  But from this extremely limited dataset, it looks like using the high/high method versus the high/low method results in a somewhat different distribution of confidently identified ions.
I'm definitely not done with this concept, or even the analysis of this one pair of samples, but that is all the time I'm willing to commit to this today.
Posted by Ben