Static exclusion on an Orbitrap Velos 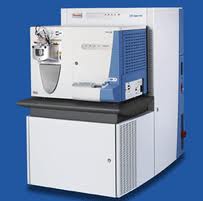 One of the most useful, and possibly least exploited features on an Orbitrap is the Reject Mass List dialog box. This feature allows you to create a list of up to 2,000 ion masses that are ignored when ions are selected for fragmentation.  For uncovering low-abundance peptides, there may be no more powerful function in Xcalibur.
For example, 95% of the protein in human plasma consists of only 14 proteins, primarily albumin.  Even when serum depletion columns are used to strip these proteins out of solution, they are still prevalent.  A single 140 minute LC-MS/MS gradient on a Velos using a standard Top10 method with a dynamic exclusion on peptides > 1 occurence, will result in a peptide output list that results primarily from these proteins.  This is where static exclusion can help.
In a recent study in our lab, we separated tryptic peptides from depleted plasma on a 240 minute LC gradient using a 30 cm MAGIC column from Proteomics Plus.
The first run resulted in roughly 300 peptides from <80 proteins.  A reasonably typical result

All of the peptides from the first run were excluded from the second run.

The second run resulted in >600 peptides from >140 proteins.

All of the peptides from the first two runs were excluded from the third run.

Now, we're getting somewhere.  The third run pulled out >900 peptides from >400 proteins.  The best part?  Less than 5% of the peptides were from our 14 highest abundance proteins.

Its important to note that this was static exclusion + dynamic exclusion.  Using the two hand-in-hand will allow you to dig deeper into the proteome than either alone.

For our work, we are attempting to develop a universal exclusion list to use on the first run of every sample, that way we aren't wasting precious running time on albumin and IGg.