I think I came up with (no exaggeration) over 1,000 RAW files from HeLa cell lysates or the Pierce digest standard on my network here. I bet a lot of people would find the same. HeLa is the go to human cell type for proteomics despite the fact that basically everyone in genomics decided 10 years ago that use of the cell line is unethical.

The NIH is actually revisiting this issue now.

The cell line is useful for proteomics for a lot of reasons, like all the transcripts/proteins are being expressed basically all the time and checkpoint phosphorylation sites may be fully activated and the cell keeps going.

You know what is tough to find? "Normal" human proteome files!

There is the Proteome Draft Map (Pandey Lab version): These are a bit older now, but the data quality is great. 24 offline fractions, 90 minute LCMS per fraction and HCD MS/MS. The files from the LTQ Orbitrap Elite are the best and the MS/MS resolution is around 30,000 (there are Velos files as well, but the density is much better in the Elite files). All the RAW files are on ProteomeXchange here.

More recently, this group employed offline SAX fractionation followed by QE HF/Plus and Lumos (for some tissues and digestion types) to make:

The RAW files are on ProteomeXchange here.
Sometimes, though, you aren't looking to start your project looking at 5e5-5e6 MS/MS spectra. It would just be cool to see if you are working with a new tissue, what you should expect:
New Resource Alert!

They do some cool analyses of these tissues, but I'm just looking for a resource today and these great RAW files are at this link at PRIDE.

The files I've pulled down are 120 minute single shot files with superb chromatography analyzed on a QE HF-X. The top 28 precursors were selected for fragmentation at 15,000 resolution. The 2-5 charged precursors were analyzed.

The only minor criticism I have of this great new resource (that I'm now using for free for my research, so I'm obviously a jerk for pointing it out, but it is worth noting if this matters to you) is that the first mass was not set at a specific cutoff, it is instead proportional to the parent m/z 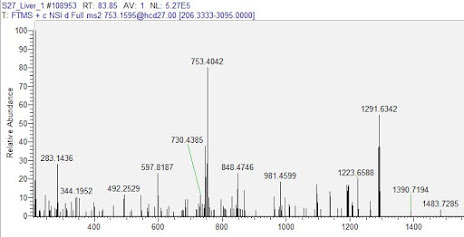 For an ion this big you won't see low mass fragments like oxonium ions from glycan monomers. So, if you were looking to survey, for example,  "how often do we see high abundance HexNaC peptides in different tissues" the numbers will be misleading compared to files that did set a lower mass cutoff static.

Programs like SugarQB that require the presence of these oxonium ions as "reporters" to flag spectra for large library glycan searches won't work very well (in part because the glycans will push up the size of the ions).

Just pointing it out like a jerk for the people who use this stuff! Otherwise, for real, this is a stupendous new resource that I'm going to use for a lot of stuff!