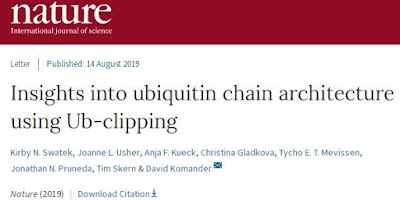 I'm going to leave this here and go sit in traffic for 2 hours trying to get 30 miles. I'm also going to leave the PDF open on my desktop and send it to people since I can't figure out what is going on here and whether this is useful for a ubiquitin linked patient phenotype we've been working on.

What I do get -- new enzyme derived from "foot and mouth disease" that does something interesting to ubiquitin chains that is cooler than just tryptically cleaving it.

Intact mass analysis (using a QE Plus) can distinguish between proteins that have single and multiple ubiquitination sites. Maybe even count the number of distinct ubiquitin sites? Not sure...

Has application to full cell lysates? I think that is something that is maybe shown here just in gels.

Somehow can distinguish between straight chain and branch chain ubiquitin? Maybe my brain is rejecting all this because I didn't know until now that ubiquitin branches? I thought it was a relatively short peptide chain that with 3 or 4 known configurations? Like GGK(something)end or LRGGK (something)end, and GGK(something longer)K(something) end, which is, by-the-way, tough to sort out in my hands, particularly with incomplete digestion in an attempt to miss the first event. Despite the fact this paper says the K-GG is "easily detectable by MS" I'd contend that most search engines don't like this mod very much, and definitely don't like the longer variants. So -- even though I don't understand what is going on here -- I realize any improvement here is worth knowing about!
Posted by Ben