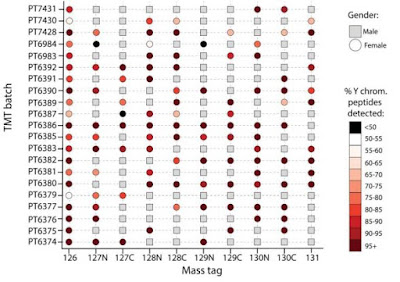 This new study in MCP is kind of a down-to-earth moment for labeled proteomics.

My rule for combining TMT sets came from something Dr. Pandey said during a conversation. Something like "you can combine 2 without much problem, but if you throw in a 3rd set or more you have so many missing values it isn't worth it." Made enough sense to me to never try a 3rd set.

In this study we see it really quantified --

Yikes, right? At the protein level it isn't going to be quite as bad, but -- if you combine 5 sets you are only comparing quantification of the same peptides from these proteins like 60% of the time? You'd better have some smart normalization planned because TMT is peptide quan. How you roll it up to the protein level when you're doing true pairwise Peptide A from sample 1-10 is a whole lot more linear than rolling up Peptide A from 1-10 and Peptide B from the next set.

This study has some smart normalization. It also has smart ways to set up the experimental design if you've got to multi-batch TMT it. This is one of those papers to keep in your back pocket for when the situation arises.

I'm personally putting it into the "Combine TMT channels" folder with this paper that has been sitting there alone for a few years.

In terms of technical details, the newer MCP article utilizes an Orbitrap Fusion with MS3 for the TMT analysis with 4 hour gradients. Data is processed in MaxQuant.

There are other interesting observations in this paper and this is at least the second time I've mentioned it on this blog (I either saw it as a preprint or a poster or both, I forget). A lot of the more interesting observations derive from the fact that they look for sex chromosome specific markers in samples from known genders. This is the second or third time I've wondered if I could utilize that somehow in the bigger clinical sets where I have access to things like the patient's (anonymous, of course) age/gender/blood type/other stuff that I basically just throw into the dendrograms after the unsupervised clustering is done...