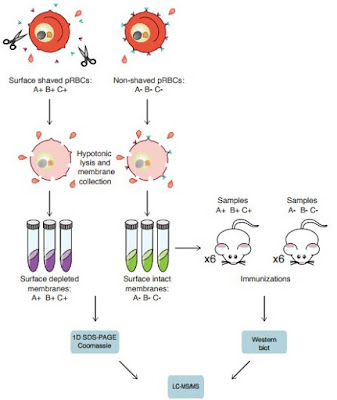 I was having an awful day. Fo' real, yo. Microsoft forced an update to my favorite PC (my Destroyer Gen1 (I got the new "Max Destroyer", but I haven't migrated anything but PD to it yet) and knocked out all of my software that had a dependency on the .NET framework (a lot of it -- watch out Windows people-- 4.7 might not be the culprit, but the timing is suspicious) but then this paper turned my whole day around! 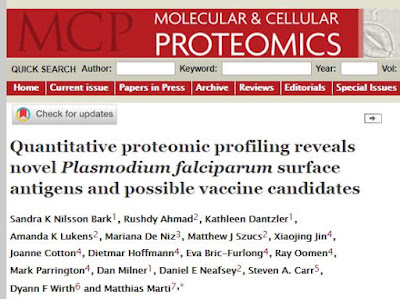 If you've had the misfortune of reading any of this blog you might know that I've got a hangup for the malaria parasite. Malaria is a protein problem. If you throw all of the world's genomics resources at it, you'll never solve the malaria puzzle. Proteomics, glycoproteomics, and (my firm belief) PTMs we don't yet know about yet are what is going to finally help us understand P. falciparum and why it kills human beings with such relative ease.

Sandra Bark et al., decided to see what the surface of the infected RBC looks like to proteomics by shaving off the proteins and doing proteomics on them. Big deal. Both Laurence Florens and Michal Fried did this independently years ago. The devil is in the details.

They biotinylate the surface proteins.
AND
They iTRAQ label everything (RBCs with great big parasites living inside them and eating everything tend to be leaky and populations of them are untrustworthy in terms of proteins leaked).

Check out the figure at the top. The number of negative controls for the study are what give it so much power. Leaky proteins from damaged cells can be eliminated --they're all leaky. Comparing shaved from unshaved membrane protein preps allow you to tell what is really important.

Deep proteomes were obtained by normal means -- 30 high pH reversed phase fractions were ran on a Q Exactive classic using 110 minute gradients and a Top12 method. An NCE of 28 was used (+1 since it is iTRAQ 4-plex).

Did I type this already? The power is in what can be eliminated from consideration! So much of the background noise can be tossed because of how good the controls are!

What did we get? Well -- to date -- the most comprehensive picture of what is going on at the RBC surface when the malaria parasite is hanging out and eating all the hemoglobin.  And new surface proteins(?) definitely peptides that might make great new vaccine candidates!!

All the RAW data has been deposited at MASSIVE, but the details in the paper for the user name and password appear to be incorrect. I'm sure it's only password locked for the review process and will be available once the study is officially accepted.

EDIT: Updated MASSIVE link to RAW files is here and will be corrected in the final version.

To these authors, I say: 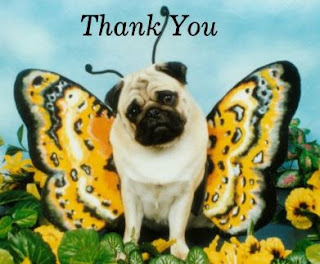 (pug people are so weird. who makes this stuff?)

Seriously -- AWESOME STUDY. I'm sending this around to friends now!
Posted by Ben