What MS1 resolution and mass accuracy do you need to be as precise as an SRM? 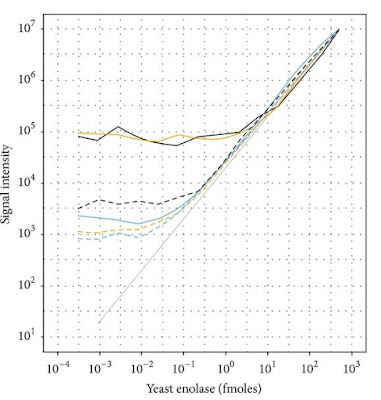 I have wondered about this for years. I even put together a really poorly planned idea to try and test it myself that was hindered by 1) my lack of access to a triple quad 2) my lack of free time 3) my lack of motivation to spend some of my little free time trying to get access to a triple quad, figure out how to run it and then...run some stuff on it 4) the poorly planned idea was written on a napkin and the poor idea was written in even worse handwriting and the ink was diluted by something that one might guess was a solution of some reasonably high concentration of EtOH buffer.  I KNOW I'm not the only person who has a manilla envelope full of napkins from late meeting hangouts with brilliant people.

What was this about again? OH YEAH!!!

As resolution and mass accuracy increase in an MS1 scan your certainty that the ion you are looking at increases. For example, if I shoot an ion through a single quad and I see a peak that elutes at 10.5 minutes and is 312.1 +/- 0.5 Da and I'm looking for an ion that is 311.8413 -- is that my ion? If the matrix is simple enough and the concentration is high enough, SURE! it probably is. But what if that is a HeLa peptide digest? If you submit that as quantification of your ion, that paper is coming back to you. The complexity there (>1M peptides?) is way too high for you to be sure.

What if you are running a super high end TOF instrument that can get true 20,000 resolution?  If that TOF comes back with 311.92, is that your ion? Your certainly is definitely going up and your reviewers might actually take that.

SRM/MRMs are the gold standard. You isolate your MS1 mass +/-0.5Da and you fragment your ion and you collect your single transition at +/-0.5Da. We've historically considered you pretty certain that you are looking at the right ion. Anyone who has done years of them in complex matrices (ugh...) can tell you that....well....you really hope you get 2 or 3 really good transitions, and with peptides you typically do. Chances are you can tease out what peak is the real one and what is coisolation. Still, though, this is the gold standard. (Also the gold standard because they all use the same expired or rapidly expiring licensed technologies which makes them 1) all the same --85% of your ions hit the detector 2) suuuper cheap today, in mass spec terms.)

SO. BACK ON TOPIC. Here is the question. At what mass accuracy and resolution do you need in an MS1 before it is as good or better than a QQQ????  After years of wondering about this I was reading a review before a meeting about something completely unrelated and BOOM!! these guys did it like 2 years ago!! 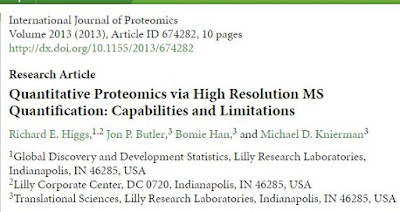 I think I know all these people....stalked them on LinkedIN just now...I totally worked with this team around 2013 on something completely different. They had the answer to this question the whole time. I've got to work on saying less and listening more. But not today!

Wow. This is rambling Saturday....

What did they do? They took multiple mixtures of increasing complexity and spiked in peptides that didn't belong. The mixtures started real simple and went all the way up to HeLa digest separated on a short gradient. As complex as you can get without getting into the waking nightmare that is plant proteomics.

The peptides were spiked in at varying concentrations. A nice QQQ was used to quantify the peptides as they went. An Orbi Velos and an Orbitrap Elite were used for MS1 scans.

They did some really imposing math stuff and worked on the certainty.

60k resolution and extracting the exact mass at +/-4ppm is roughly the equivalent of an MRM when the same retention time extractions are used.

Could this blog post have been 4 sentences and a link to this nice Open Access paper? Yeah....

EDIT: 9/11/16 -- Almost the same exact findings from a separate group around this time:

Differences? They used an original Exactive. Found that 50,000 resolution would give them the same specificity for quantification of drugs IN PATIENT PLASMA as an SRM.