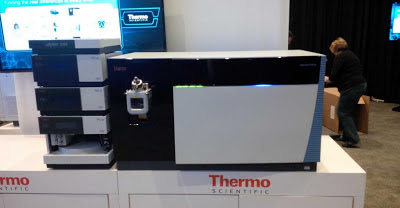 I'm not as ASMS, but I'm following closely on Twitter, and talk about a big show!
Thermo has already revealed its new Orbitrap Fusion system, which they are calling a Tribrid system because its has a quadrupole, an ion trap and the fastest and most powerful Orbitrap ever.  Who wants to run an 450,000 resolution or 20 scans per second from the same little box?  What about an ETD system on the front that never never has to be cleaned or tinkered with?   If you answered "everybody" you're probably right.  The picture above was taken by Julian Saba this morning at ASMS

To find the official release information and a video of the Fusion in action go here.