This paper is both a relief and a disappointment.

Its a relief that someone finally published that iniparib is not a PARP inhibitor.
It is a disappointment because they published the molecular mechanism of iniparib before I could.  The wait for permission to publish scientific results at my old lab takes anywhere between several months and  a few years.  Unfortunately, while waiting for permission, we sometimes get scooped by other labs.  I have been told that we have withdrawn this study from the approval process in the hopes that management will get to one of the other studies we have pending.  Since this data will not be published, I see no reason why I shouldn't show these results here.
First of all, combining iniparib with glutathione (GSH) at a pH of 7 causes GSH to undergo two mass shifts to heavier species. 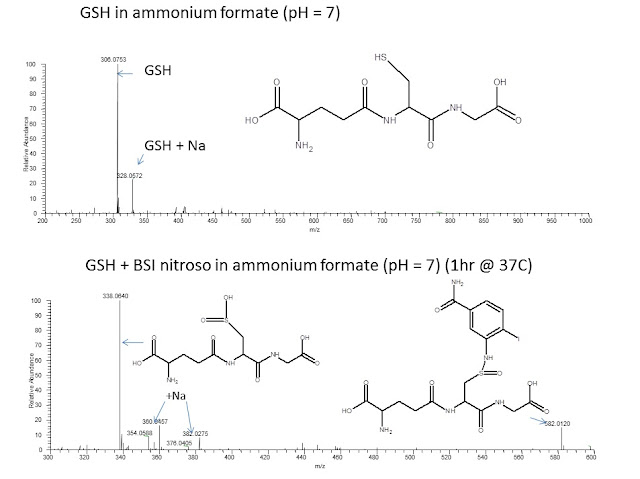 Fragmentation analysis suggested that the 2 species were the two structures shown in the bottom panel.  The lower mass appeared to be an addition of -OOH to the free sulfur, while the higher mass appeared to be the iniparib compound actually binding directly to the sulfur.  You'll notice that I ionized this mixture at a pH of 7, in my normal running buffer, 0.01% formic acid, the iniparib bound GSH disappears, as it seems to be cleaved to the -OOH version in the acid (this lines up with previous studies using radiolabeled drug)
GSH is a strange peptide.  In order to see if the drug would modify a more normal one (and to confirm the previous study that iniparib binds GAPDH), we had the cysteine-containing regions of GAPDH produced by a peptide synthesis company. 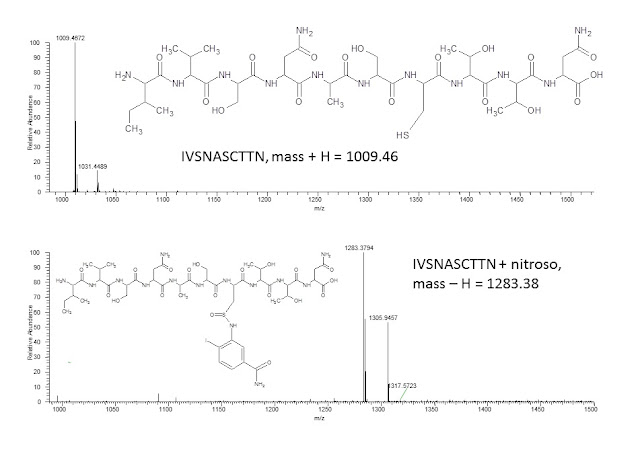 In this second experiment, we only saw the mass shift corresponding to the drug sticking directly to the cysteine of the synthetic peptide.  This modification was far less acid-labile than the GSH modification, suggesting that I could possibly detect this modification during a normal proteomics study.
First of all, we used the Cysteine-TMT system to label and pull down peptides with free cysteines (per manufacturer's instructions) from MCF-7 cells that were 1)control 2) iniparib treated.  We found a 26% drop in identificable TMT-modified cysteine peptides with iniparib treatment.
We then looked directly for the BSI static modification in a SILAC experiment (using a custom modification for the BSI mass shift) and identified 700 proteins that had picked up this modification.
I performed gene ontology analysis of these proteins using Panther GO -- 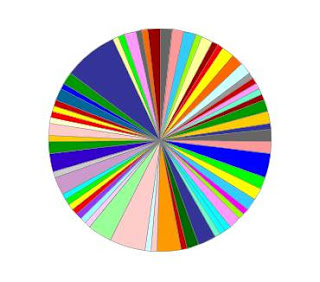 -and saw that there was modification indiscriminate of pathway or cellular localization.  The drug selectively binds to any free cysteine it can find.
The big question, then is why does this drug kill some cells and not others.  I know the answer to this question, as well, but I didn't do those experiments and I don't think I should write about it here without his permission.