The Glycan (glycomics?) field is coming -- and they're not messing around! 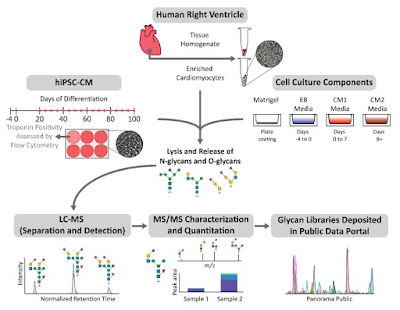 There is a mandatory quote from someone at every talk about glycan modifications of proteins that's something like "glycans are involved in every human disease." I spent some time trying to find where that came from, but since I couldn't find anything conclusive, I'm going to blame Jerry Hart for it.

Glycan chain analysis suuuuuucks....they all have the same stupid masses. Is it a GlcNaC or is it a GalNaC? It's all the same stupid HexNaC mass. It sucks whether you approach them when you've liberated them or when they're still attached to the peptides. The bond energy is waaaaay different for glycosidic and peptide bonds and if you are using fragmentation that is biased toward bond strength like CID/HCD you are only going to get part of the picture. But smart people are still finding ways to tackle this stuff. 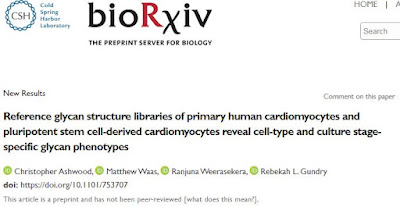 Okay -- as cool as it is to say the glycan and disease thing above -- it's a lot harder to do something that opens up glycomics capabilities to the world. And that is what we see in this great new preprint!  I'm not going to embarrass myself or insult anyone with my interpretation of the biology. You know what is important and I do get? This is making cell specific libraries of glycans. That you can get and I can get and everyone can get and now we can use them! Because as stupid as the masses of the individual sugar things are -- when they make chains they are different! 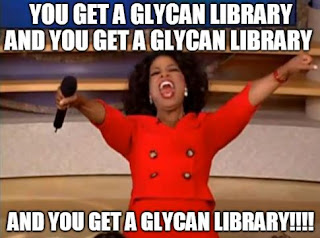 Something this group has been working on for a while is the use of porous graphite columns to resolve glycans chromatographically. The work I'd seen previously had looked great, but the MS/MS was ion trap (still cool!) but here we see this technique powered up on an Orbi Velos Pro.

This group is....intimidatingly.... good at this stuff.

Wait. What's a GlycoPost? This is where I change the title of this blog post. Cause this is a new-to-me data storage site for the glycan stuff!  WoooHooo!

It's just as easy to use as ProteomeXchange! I just pulled down some RAW files from glycan analysis of the atlantic salmon!  Look....I'll never tell you what to do with your weekend....do whatever you want. I've got salmon sugars to look at!

Back to the Crashwood paper...okay...so how do you analyze glycan/glycomics data, anyway? Byonic (Protein Metrics) is used here...man...this is a lot of data....as well as GlycoMod -- which is really cool (link here) and something called the GlycoWorkbench (all code is available here!) and this is all used to filter down to Skyline for the quan and statistics.

Whew....okay...so glycomics still is not easy. It's hard even getting my head wrapped around all the stuff they did!

Okay -- but like I mentioned before -- I don't have to! Because I can just go to the Panorama public link above and just download their library! 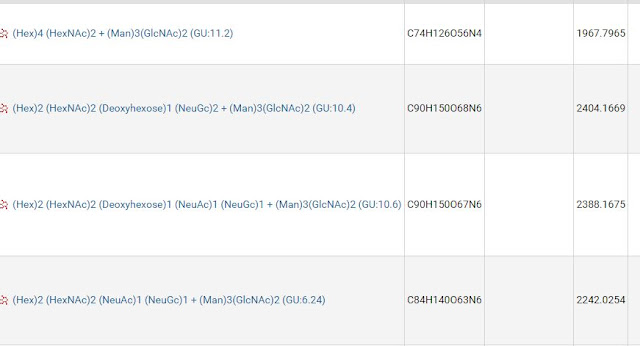 BOOM! How cool is that? Look -- any study we do is a phenomenal amount of work and it's still definitely more work, but if you make it as easy as possible to get your resources and output that's how to ensure that you're making the future better!

I should be working on a talk, but I'm going to keep typing in this box.

Part 2: I want to remind you about SugarQB. 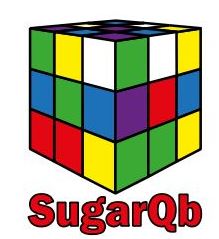 What's that? That's a totally free glycoproteomics search engine that works within the Proteome Discoverer framework. (There might be a stand-alone -- I forget)

There hasn't been a SugarQb paper, but it's been applied in a couple of great studies. You can get the nodes at www.pd-nodes.org

Here is the thing. SugarQb is great -- but only as great as the libraries that it has. This new resource from Gundry lab I just rambled on about allows me to power up my instance of SugarQb, because I can add this great new data to the human glycan library that I've got (it's just a CSV file!)

I haven't had Byonic in a while, but unless things changes -- it works the same way, and obviously this all works in Skyline as well!
Posted by Ben