Why are my MSAmanda 2.0 searches faster?

I recently mentioned in a Twit on Tweeter that I've just almost moved to MSAmanda exclusively for my data processing. The one final complaint (for me) is now gone. The newest version is so fast that SeQuest is irrelevant.

Multiple great people responded that they aren't seeing the same thing. I figured it couldn't hurt to get my settings and stuff out there so we can try to figure out the difference?

Probably worth mentioning that I'm searching a highly fractionated data set ran on an HF-X (48 files and around 2.7e6 MS/MS spectra for dynamic mods of K+acetyl, S/T + phospho and M+ oxidation. Even with ptmRS and Percolator the total search time is something like 4.5 hours.

Important -- there is a big difference in speed when using second search (you're removing all the fragments that match your first peptide and then going back through and re-searching every MS/MS spectra for new peptides. Go over to "Show Advanced" and scroll to the bottom. Make sure it looks like this if you're doing a speed comparison. If you want to identify more peptides, particularly if you're doing single shot -- switch it to True! 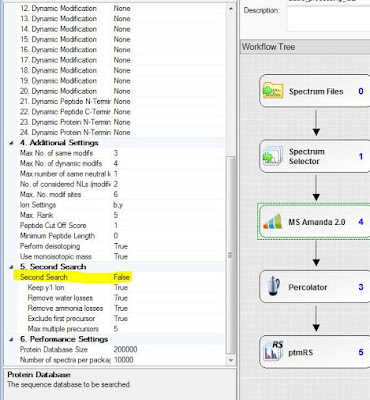 For this search I'm using 5ppm MS1 and 15ppm MS/MS (yo -- don't tell anyone, but I didn't run this HF-X at full speed. I needed more fill time anyway -- interestingly there is a huge difference in the number of lysine acetylation sites I recover if I run the same sample at transient match vs excessive fill times. [30ms vs 150ms]. Its in a paper that I have been spending every waking moment addressing reviewer comments on and the main reason I haven't blogged in a like a month.... oh -- and I honestly don't like the HF-X mass accuracy at full speed...Maybe it's this particular instrument? However, it's similar to my experiences running a Fusion 1 at 8,000 resolution, I can't reliably use 15ppm MS/MS fragment accuracy. Again, could be just this instrument. Could be a calibration issue, but at MS1 5ppm on this dataset I have no problem, either way I went with 15,000 resolution MS/MS for this study)

And that's about it. If I run Sequest the same way (but with 0.02 Da fragment) MSAmanda is faster.

If the PC specs matter?

I'm using an OmicsPCs Maximum Destroyer I purchased at ASMS Indianapolis. Unethical life pro tip (ULPT): If you're local to a conference and drive a hatchback to it, sometimes you can get deals by going around to the booths and asking people if they really want to ship that used piece of equipment home. 10 minutes before a show closed up this year, we got 2 of these things!  How do you homogenize a solid tumor? There are lots of ways, but you could start by putting it in an Omni Beadruptor12 for 7 (SEVEN) seconds. Full disclaimer: I haven't had time to compare the extraction efficiency for proteins, but we will soon. Small molecules? You can extract them out of wood in a minute or so. Not kidding. Like the wood from a tree or that you make furniture out of.

This PC is a couple of years old now, but it still maxes out Windows 7's bizarre (1-7.9?) rating scale. It appears to have 20 threads. I assume it's 10 cores and 10 simulated "hyper cores/threads" or something, but I don't know.

I have put in 2 upgrades myself. It has a 1 TB Samsung Evo (I think it originally had a smaller Samsung Pro Drive) solid state drive and I put a 1080T graphics card in it so that I could explore a simulated universe that 1.8e19 planets in it at a high frame rate while waiting for MSAmanda 2.0 to finish searching stuff.

The GPU does nothing in Proteome Discoverer, solid state drives are critical for fast searching. I don't know if the RAM on this thing is a special high speed configuration or something. I can see through the glass that there are 4 sticks and they pulse blue LEDs off and on, and they do it much faster when a search engine is running. (The speed increases almost up to strobing when I run MetaMorpheus searches, does that mean MM uses tons of RAM? I dunno, but that would make sense).

I assume none of this was helpful, but I sure missed typing in this box!
Posted by Ben