Correction: Sunday was a big day. I've already mentioned equipment stuff, including the FlexTimsTOF,  the Fusion 3 system and the Exploris 480. I've had trouble remembering the name of the last one and heard other people have as well, so I came up with this image to help me. 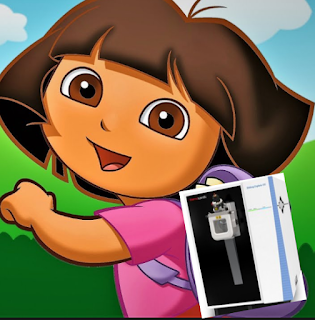 (The 480 is cause that's the resolution the little thing can do!)

There was new hardware everywhere and awesome vendor events on Saturday, but Skyline was what I was looking forward to.

The Skyline venue was great (Georgia Aquarium) And packed! There were people standing/ sitting. And it had a really cool place for coffee  breaks.

It was the 10th Anniversary of Skyline and we heard from many of the developers and the first users of the software that helped shape it toward being something that is activated thousands of times each day around the world.

Again this year, the organizers tried to pick talks that really demonstrate the flexibility of Skyline to adapt to new applications.

This was the schedule (you can click to expand it) 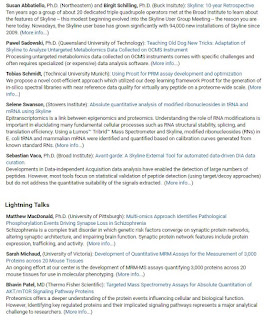 Skyline for nucleotide quantification studies!  This is sooo cool because along with all these hardware advances that have helped us on the protein side, the hardware is getting pretty good at the nucleic acid stuff as well -- and here is your data analysis package. You already know how to use it!

Using Skyline for GC-MS data?  This is reaaaally smart. GC-MS ionization is mostly rough ionization, so you have loads of fragment ions and often very little of your parent ion around. Sounds a little bit like DIA, right? That's how Pawel Sadowski's lab is doing GC-MS based metabolomics! By telling Skyline it's metabolomics DIA data. He also showed how you can deconvolute overlapping peaks (in GC-MS this is a very different concept than in intact proteomics) within Skyline itself.


Then we got to see how PROSIT can generate spectra for Skyline and how well it performs compared to previous in silico fragment generation data. Super slick.

We're eventually going to do global untargeted studies on everything on this planet. When it comes to more focused studies guided by all that stuff, it's great to see that 10 years of development has provided us a free tool that can take us to the next step in targeted validation of both new and historic data.