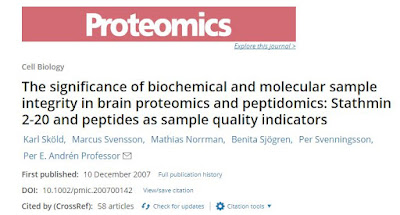 I've got a ton of new cool papers on my desktop to read when I get caught up, but I landed on this study while looking for something else, and I found the results remarkable.

The questions:
1) How much does postmortem degradation effect the brain proteome? To go after the answer, this team used a mouse model system. What they found (using 2D-DIGE, and LTQ and a TOF) is some massive changes even 1 minute after sac'ing the mice.

2) Can they find markers that would give them a reliable measurement of the quality of the brains for use in further analysis?

I found myself multiple times  reading between the lines and imagining that this group primarily worked with human postmortem tissue and that there was a lot of variability in how those people had died and how long it was before the samples would find the way to their labs.

What they found is really interesting -- almost immediately changes after death if they don't do something rapidly to stop protein degradation. Released peptides from protein degradation nearly triple in the first 10 minutes postmortem! Unfortunately, a lot of their known free peptide markers decrease in abundance at nearly the same rate!

They find some markers they like which make it to the title and abstract that they can use to as a metric for the amount of degradation that has occurred in that sample.

I like this paper because it points out a problem I wouldn't have considered and then uses the available proteomics technology to develop a way to attack that problem. Biologically, the results are pretty stark. There is no real leeway there between the amount of time that your brain must be receiving oxygen. Even 60 seconds without it and things start getting very out of control very quickly!
Posted by Ben