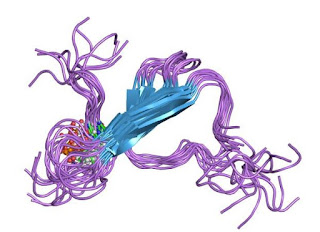 This is a Tau protein. They hang out in the brain and if they are all working correctly, everything is awesome. When the Tau proteins aren't working correctly? It's real bad. Alzheimer's, Parkinson's and other neurological disorders are tightly linked to malfunctioning Tau proteins. (Honestly, I don't know how the cause-effect thing works here, or if it is even 100% understood. What everyone seems to concur on is: bad Tau = bad news)

As with every other clinically relevant assay, we've got to start somewhere. Currently it looks like most of the analysis of Tau proteins is performed with ELISA assays, though more sophisticated institutions may be moving over to antibody pulldowns of specific Tau forms followed by SRMs.

In this new study from Barthelemy et al., these authors show how we can improve upon these assays. ELISA is a great technique for detection and quantification but it becomes a whole lot less fun when you've got multiple isoforms to go after. Likewise, immuno-SRMs may recognize one variant of the protein but skip others.

What is the solution they tried out? Building a full length stable isotope labeled Tau protein and spiking it directly into their synthetic cerebral spinal fluid (CSF) [they used serum. people don't exactly line up to volunteer CSF], digesting and then doing Parallel Reaction Monitoring (PRM, FTW!) on a Q Exactive.

Now, they did enrich the proteins to some degree, and I'm a little unclear as to how it was done. It looks more like a precipitation to me. If this is your field, you should pay more attention to those paragraphs than I did.

What I did pay attention to: They used a 10Da isolation window in their PRMs. This way they could pick up both their heavy labeled peptides and their lights in the same windows. They also scheduled the PRMs. It might seem risky to use a window that wide in a biological fluid, but the PRMs were read at 70,000 resolution and the fragments read out with a 3ppm maximum window in Pinpoint. So they had:
1)Retention time
2)Natural fragments at high resolution and high accuracy AND
3)Standard heavy isotope fragments

What did they get out of this? Crazy sensitive, crazy precise, absolute quantification of not one Tau protein, but of 22 different peptides that showed the presence/absence of specific regions and/or isoforms of the Tau proteins. In one 13 minute assay.

Of course, they go on to show that they can do this assay in people's CSF. I love this paper. Not only because it has been a science free day, but because this shows how we can take our cool toys and apply them to solve medical problems. This goes into the clinic and its: cheaper, faster, more certain and returns way more useful data than anything we currently have. 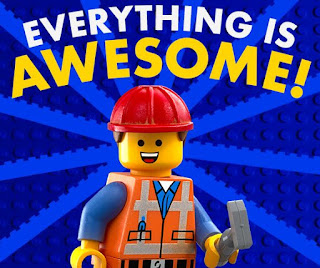 (Shoutout to Dr. DuFresne. It is a good movie, but I had that song stuck in my head for 4 months...)
Posted by Ben