ETD is awesome. Is it complicated?  Yeah, a little, but on the right sample and the right conditions it gives you data you can't get from anything else.

In CID or HCD fragmentation you only have two things to think about: How many ions I want to fragment and what collision energy (CE or nCE) that you want to use.

Number 1 looks more complicated than that because you have another time that you need to use.  This is called the ETD injection time.  This is the same as the AGC target for your ion you want to target.  In other words, you tell the instrument "use 5e5 ETD anions OR spend this amount of time trying." This is really important on the last generation of instruments, such as the LTQ Orbitrap XL or Elite with ETD. The intensity of the anion produced by the filament-driven ETD source tends to drop over time (between cleaning and tuning cycles). You can compensate for that drop by allowing greater fill times to reach your target.  It is virtually a non-issue with the Fusion and Lumos systems as the ETD production stays almost perfectly stable day after day after day.

But this isn't the topic of this blog post.  This is: This toggle was present (though it looked a little different!) on my first Orbitrap, the great XL plus ETD.  There were no options for it.  You either had a checkmark in the box or you didn't.

I think ETD Supplemental Activation (SA) was described in Swaney et. al, here (open access!).   However, I think there was a paper by David Horn that pre-dates it that did something similar with ECD. A quick Google Scholar search doesn't pull it up for me, but I'm pretty sure that it exists.

Nevermind.  In the Swaney paper you'll see the logic behind the use of Supplemental activation and its power.  In a nutshell, you allow the ETD anion to react with your target peptide for the set reaction time.. and then you add just a little bit of CID (called CAD in the paper I'm referencing) to improve things a bit.  This leads to an improved formation of the c and z ions produced by ETD.  Awesome, right!?!  There can, however, be some minor drawbacks. You can sometimes impart a 1 Da shift on some of the fragments.  You can also sometimes induce secondary fragmentation events.  On the earlier LTQ Orbitraps you couldn't control the amount of SA that you employ. It was set at some nice low level to keep secondary fragmentations rare.  I think starting with the Orbitrap Elite (I get all these instruments mixed up) you have the ability to control how much SA you use.  Too much and you start to see secondary fragmentation events.  If your search engine isn't set up to handle these possible b/y or hybrid fragments you might lose data.  Again, however, you should primarily be seeing c and z ions (with some mass shifts here and there). 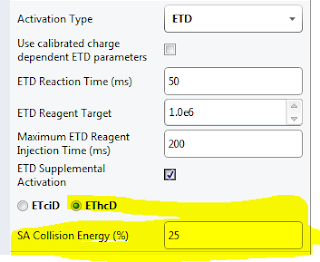 Correct me if I'm wrong, but I think this was first described by Christian Frese et. al., in this paper using a hacked Orbitrap Velos (I packed my filing cabinet and I don't have online access to this one).

A great reference for this technique is this poster by Protein Metrics.  In this they show the power of this technique for PTMs. You get one scan with fragmentation data characterizing your PTM spread and your peptide spread.  There are some killer studies out there using this technique for PTMs and proteins and bunches of other things.  If you want to try this technique on just peptides, it is critical that your search engine is equipped to handle c/z/b/y ions to get good data.  On Sequest you just add a weight to your ions. On Mascot (depending on the version) you may need to actually go to the server itself and change the configuration to allow Mascot to read all 4 fragment types into its calculations.