CID vs ETD for phosphopeptide identification

Experiment:  A new general phosphatase inhibitor was used to treat a SILAC heavy labeled cell line. Phosphopeptides were enriched by the three stage method outlined in my methods book.  LC-MS analysis was performed with CID neutral loss MS/MS with optional ETD activation of the phosphopeptides that were large (z=3, >900; z=4, >750, all ions z>=5; the default Xcalibur supplemental fragmentation method)
Post-processing we looked at the number of phosphopeptides that were identified by each method that were interesting (differentially regulated >2.0 fold).
Here's how it breaks down: 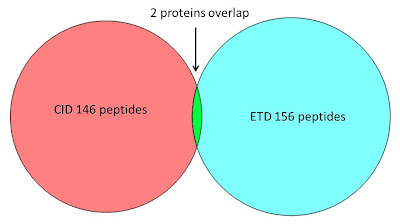 Striking?  Optional ETD fragmentation more than doubled the number of interesting proteins that were phosphorylated.  The two proteins that overlapped?  They were both unique phosphorylation events that happened to happen on the same protein.  At the peptide level there were ZERO overlapping phosphopeptides of interest.
Summary:  If you have ETD on your Orbitrap, even though it is a pain to clean and tune, using it to supplement CID may double the number of interesting phosphorylation events.
Posted by Ben